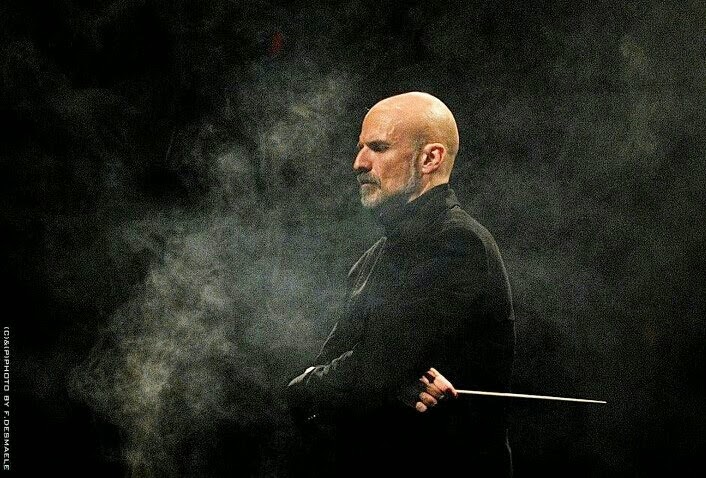 From an early age he was introduced to music by his parents, passionate melomaniacs, showing a predisposition and great joy in singing.
He began playing at the age of 4 on Grandma’s piano.

Looking at the initials of “Horizons of Science and Technology” in 1966 on Italian Television, he first approached with the music of Igor Strawinsky, who will become his guide and his favorite composer.
Decisive for the study of Music was the knowledge, always on TV, of the overwhelming vital energy of Leonard Bernstein in the performances of the Beethoven and Mahler Symphonies with the Wiener Philharmoniker.

He took part in specialization courses in Italy (Assisi, Terminillo) and abroad (Russia, Hungary, Switzerland) for the composition and conducting of the orchestra.
Study the traditions of Italian lyric music with Maestro E. Campogalliani.

Invited by the University of Hofstra (New York) to hold a course on the traditions of Italian opera and on the teaching of conducting.

Since 1990 he has taught at the Conservatories of Cagliari, Turin, Trapani and Cuneo in the subjects “Orchestral exercises” and “Theory, solfeggio and musical dictation”.

In 1999 he was in 1st place at the National Competition for chairs in Theory and Solfeggio in Italian Conservatories.

Since 1999 he has taught the chair of Theory, Solfeggio and Musical Dictation at the “L. Refice “of Frosinone.

1996 – Author of the work in one deed “La prima Alba”, winner of the Competition organized by the Teatro Regio of Turin for works composed for the Lower Secondary School. This work was then performed at the Piccolo Regio in Turin in the 1995-96 season and performed in various Italian theaters and conservatories.

2017 – Author of the transcription for Chorus of Pizzicato Polka by Johann Strauss-Joseph Strauss published by Vallegiovanni publishing house. 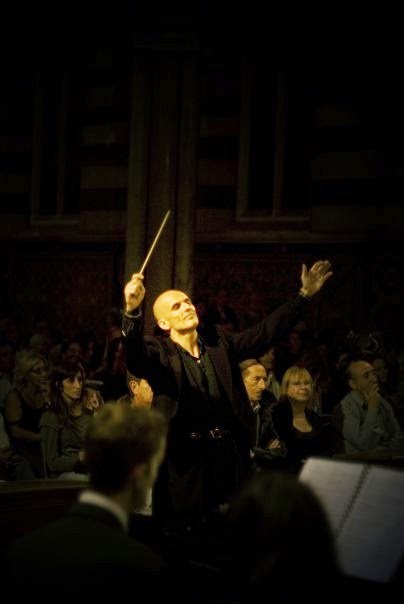 COLLABORATIONS WITH CINEMA AND TV

1992 – Directs the RAI Orchestra of Turin for the realization of the soundtrack of Rai 2 Fiction “Dov’eri quella notte” with the music of Maestro F. Trecca.

1995 – Participates in the commemoration of F. Fellini, in Via Veneto at Caffè Doney, directing music by Nino Rota. 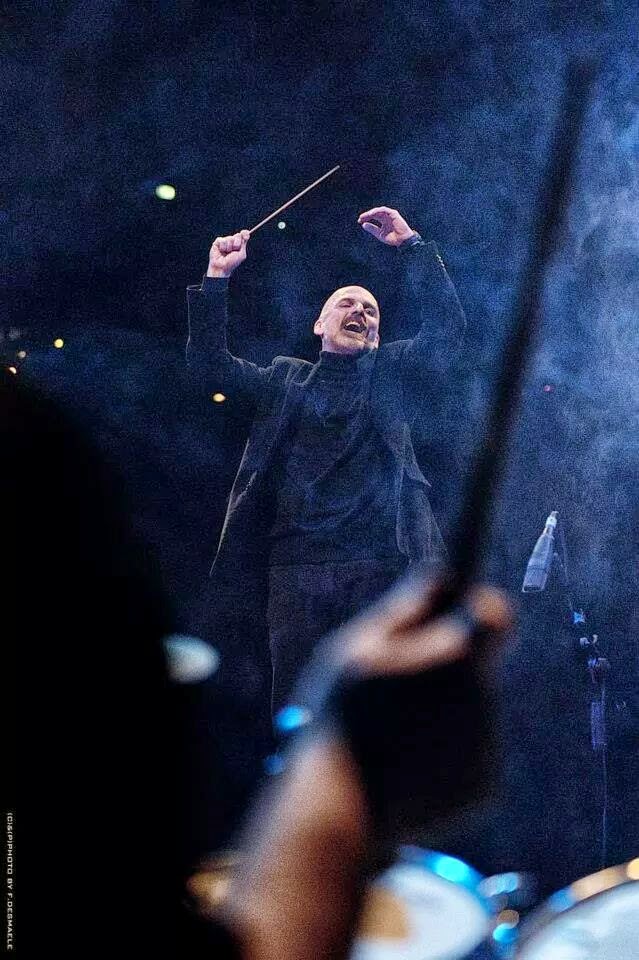 1988 – He founded il Coro “Via Giulia” with which he performs a program of baroque music accompanied by a string’s orchestra and, in 1989, with a much expanded staff and the definitive name of CORO MAVRA, the Carmina Burana of Orff at the Church Valdese of Rome. The concerts receive a general applause from the public and critics by registering sold out for each show.

With the Choir he performed in the Cathedral of Favara (AG) for a concert of sacred music on Christmas night.

1990 – He founded and directed the MAVRA Orchestra of Genoa with which he won the 1st Absolute Prize at the International Competition of Stresa, subsequently performing many applauded concerts in various Italian cities.

1990 – With the CORO MAVRA performs at the Olympic Theater in Rome, as part of the cultural events of the World Cup, the Carmina Burana of Orff, reporting a great consensus of public and critics.

1991 – Guest of the Festival dei Due Mondi di Spoleto, conducts in the first performance the opera “Green Planet” by F. Amendola with the Chorus and the Orchestra MAVRA, also recorded on CD, edited by Bongiovanni.

The stable collaboration with important Eastern European Symphony Orchestras leads him to the orchestras of Oradea, Satu-Mare, Bacau, Craiova, Arad, Cluj-Napoca (Romania), the Orchestra of the Radio-Television of Moldavia, the Symphony Orchestra of Varna (Bulgaria) and the Udmurtia Filarmonica (Russia), both during their tours in Italy and at their offices, always receiving enthusiastic support.

1998 – Performs a theatrical tour conducting “L’Histoire du soldat” by I. Strawinsky and “Façade” by W. Walton with the soloists of the Teatro Carlo Felice of Genoa.

2002-2003 – Directs the absolute premiere, in full, of the lyric opera “The Miracle of the Corporal” by A. Vitalini, represented, first in Savona and then revived in the Abbey of Casamari (Fr) and the Sinopoli hall of the Rome Auditorium, with the Regional Orchestra of Lazio and broadcast by the Italian RADIO3 and Vatican Radio.

2006 – With the Ciro Lirico di Craiova he performed the Carmina Burana by Orff, the first concert of classical music broadcast live on the web.

2010 The renewed collaboration with the CORO MAVRA, recreated with the same friends after almost twenty years, brings several concerts in Rome and Roccaraso with performances of Sacred Songs and Carmina Burana by Orff.

26 Dicembre 2011 – Rome – The members of CORO MAVRA organize a Charity Concert at CARITAS, involving all the people present in the Family Home and offering them, in addition to the passionate performance of Christmas songs, clothes, food and lots of smiles illuminating the afternoon with their sensitive and full humanity presence.

2012 – Crown a dream lasted twenty years: contact Ron Geesin, author of the choral and instrumental part of Atom Heart Mother, buy the orchestral parts from him, and May 18 runs the Atom Heart Mother suite of Pink Floyd in the original version of 1970 in a concert at the Teatro Olimpico in Rome showing enthusiastic support from the public and critics.

On 9 September he is invited to hold a seminar on Atom Heart Mother at the Jazz house in Rome.

On 2 October he again performed the orchestral masterpiece of Pink Floyd in a concert at Piazza S. Silvestro in Rome, as part of the “Radiosuono” Roman Summer event.

On December 1, he performs three Floydian concerts for the show “The Night of the Museums” at the House of Architecture in Rome, showing a full house in every performance. The Assessore alla Cultura of Rome chooses this concert to kick off the event. Services are provided for the tg3 and tg1 aired the following day.

2013 – on January 19th and February 9th, he directed at the Auditorium of Via della Conciliazione in Rome two shows of ATOM IN ROME, registering a sold out and an extraordinary success with the public and critics.

On May 15th he performed the Carmina Burana by Orff with the CORO MAVRA in a new version with piano, percussion and brass.

On 18 May he participates with the CORO MAVRA at the Night of the Museums, performing in three concerts a choral repertoire of the ‘900 (Ravel, Strawinski, Petrassi) at the Pelanda (former slaughterhouse) in Rome.

On June 20th, he is invited with Floydiana and CORO MAVRA at the Rock City review, performing music by Pink Floyd.

On September 28th he performed Atom Heart Mother in Piazza Sempione in Rome for an event organized by Radio Popolare.

On 5 October he directed the show ATOM IN ROME at the Gran Teatro in Rome.

On December 22nd he performed at the Casa del Jazz with a quartet and the CORO MAVRA in the “Christmas in Jazz” show.

2014 – On 22nd August he directs the new version of the show ATOM FOR ISLAND in Marsciano (Pg) for the season “Musica per i Borghi” in a square packed with people.

2015 – On 10th January he took part in the First Choral International Festival of Naples, directing a program entirely dedicated to Pink Floyd In acoustic version.

On 1 August he directs the show ATOM FOR ISLAND as part of the National Conservative Festival in Piazza Vittorio Veneto in Frosinone. The event is followed by over four thousand people with enormous success.

On November 27th he is invited to participate, with the CORO MAVRA, in the splendid Church of S. Maria delle Fratte in Rome at a Mass celebrated by Cardinal Vicar Agostino Vallini on the occasion of the Marian Feasts.

2016 – On January 5, he conducts a concert organized by the Municipality of Frosinone at the Nestor Theater, performing a Mozart and Christmas Carols program accompanied by the archetypal Galileo and the CORO MAVRA.

On January 6th, he repeats the Concerto with Sacred and Christmas Songs at the Church of S. Andrea delle Fratte in Rome with the same musicians.

On January 10th he took part in a concert at the “I Concerti di San Gioacchino in Prati” concert, directing the MAVRA CHOIR in Music by Bach, Mozart, Strawinsky and in Canti Natalizi.

In the summer of 2016 he collaborates with a rock group in a show entirely dedicated to the sensual music of Peter Gabriel with the CORO MAVRA.

On September 30th he performed for the first time the work THE WALL by R. Waters with Band, CORO MAVRA and a group of wind instrumentalists. He takes care of the transcriptions from the original for this workforce proposing an absolutely innovative version.

2017 – Performs in the prestigious Auditorium of Isernia the show Atom Heart Mother and More, a much anticipated concert in Molise, which has recorded an extraordinary success with the public.

Grants an encore with the same staff in Roccaraso, 23 August as part of concerts organized for the summer